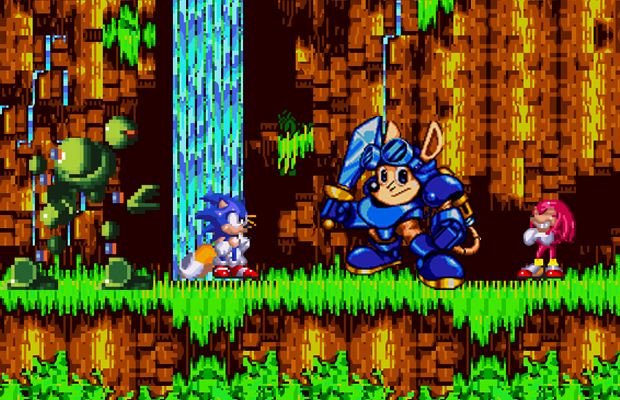 Very famously, Sonic & Knuckles featured one of the greatest technological advancements of the 16-bit gaming era. By that, we’re referring to its unique “lock-on technology,” which made the cartridge serve as an expansion pack for Sonic the Hedgehog 2 and 3, therefore shapeshifting how we saw downloadable packs in today’s video games. Many have wondered what it would be like to play other non-Sonic games on the beloved Genesis classic. We have. So in celebrating its 20th anniversary, Evolve put together its wish list of Genesis games we wished played with Sonic & Knuckles.

Developer: Capcom
Strider’s popularity is undeniable. The year 2048 could be daunting for this badass ninja assassin, but a little Sonic and Knuckles would solve that. While the animated platformer takes the fast action approach to gameplay, Strider could roam around the sides of the maps with his crawling up walls ability and even his super slash to take out the enemies that Sonic misses while he travels at mach speed. Climbing up the walls, sneaking around the corners and even popping out as Sonic attacks his enemies would have made for dope gameplay.

Developer: Emerald Software
The king of pop himself was reimagined into one of the most bizarre video game experiences of all time. Moonwalking your way across the terrain of mafia houses, like those out of his music video for “Smooth Criminal”, really proved to be a surprisingly fun task. While Michael Jackson shot energy out of his shoes and even boomeranged his hat across long distances, we can’t help but dream of this game working with Sonic and Knuckles. For some reason the idea of seeing Michael Jackson moonwalk his way into the Sonic universe, would prove to be the most hilarious and entertaining moment in video game history.

Developer: Sega
Ristar really nothing original for Sega. It actually looked a lot like Sonic as a character. With a sort of circular type body and the ability to extend his arms to reach certain enemies or platforms, Ristar proved to be exactly like Sonic’s gameplay, only running at a slower pace. It was known mostly for its awesome strategic gameplay. Sonic and Knuckles could have benefited greatly from this dynamic and often confusing gameplay. Some of the same mechanics even exist in both games. So it only makes sense.

Developer: Konami
Rocket Knight is the only one of these characters that could keep up with Sonic. With his trusty rocket pack and energy sword, Rocket probably had the best chance of speeding the way Sonic could. Flying off walls and jumping off pads couldn’t compare with the experience of launching Rocket across his 2D terrain and collecting apples, while he hung from his tail. Sonic and Knuckles could have greatly benefited from Rocket Knight’s ability to launch himself and then glide across the terrain to reach platforms. Sonic in Rockets world actually would fit rather well. Rolling around and jumping between platforms could have worked rather well.

Developer: Shiny Entertainment
Oh god, Earthworm Jim. This robotic earthworm could not be stopped. Considered to feature some of the best cartoon animation of the Genesis era, Earthworm Jim was a power to behold. Jim’s head could transform into different shapes and jump in toilets to teleport. Pure comic fodder. Sonic and Knuckles could run through the streets fighting enemies and Earthworm Jim could whip his head towards the power lines and ride down to save the day.

Developer: Treasure
I don’t think anyone could properly describe Dynamite Headdy. Featuring puppet towns, even spirits and a dark demon king, the platformer was just as fun and interesting as the ridiculous story lends itself to. Smashing your head against enemies and rolling around like a puppet across the Sonic universe can only be a dream. Or even better yet… Sonic and Knuckles helping Headdy defeat the evil demon cats and attacks them as the demon cat sucks up energy with a Japanese painting in the background. This dream cannot get better.

Developer: Virgin Games
Part of a series of games all with the same name, the Genesis version of Aladdin was the best-known version of the batch. With advanced graphics and interesting gameplay mechanics, it proved to be a timeless classic. We could only imagine what it would be like to see Aladdin climb ropes or climb across those wood planks in Sonic and Knuckles, utilizing Knuckles skills to collect coins and dodge those awkward half 3D balls swinging at you in the dungeons.

Developer: BlueSky Software
Known for its wacky level design and cool transformation abilities, this action shooter has become a staple of the Sega catalog. With Vectorman being one of many “orbots” consisting of only orbs, he was able to transform into interesting tools like a drill, bomb, and even aquatic form. A far stretch from reality, wouldn’t it be fun to see character make an appearance? Turning into drills and bombs to escape Dr. Robitnik’s machines and Sonic launching off Vectorman into enemies would have been a fun experience to behold.

Developer: Sega
Kid Chameleon took the platforming world by storm in 1992. At the height of standard arcades, the game offered a unique story to describe how this kid got his wonderful power of being able to put on different masks to inherit power. While this kid does not do flips off walls or go into balls to speed up faster, he embodies a multitude of characters and their powers. Sonic and Knuckles was known for being able to play many stages with many characters and the experience would have been only heightened by Kid Chameleon’s masks. Whether you were Skycutter reversing gravity on iconic levels or MicroMax being able to shrink down to smaller sizes to make jumps and move places Sonic couldn’t, this type of game is what Sonic fans always wished was available for their expansions.

Developer: Sega
It is sort of a cheat to say we wish we could play the original with Sonic and Knuckles because you technically could. While the game would say “No Way” when you entered the screen, pressing all the buttons at the same time will earn you access to play the special level known as “Blue Sphere”. While it was not the fun extension 2 and 3 were, Sonic the Hedgehog could have been the best experience for the expansions. Sure, nothing would have changed in terms of level design and character arch, though the gameplay could have been drastically enhanced with Knuckles thrown into the mix.